The fitout begins, lots of pics of an empty boat, 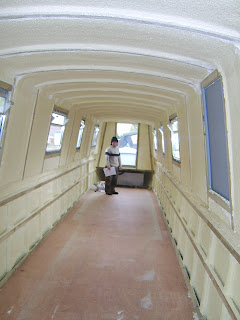 Once in the water Laney spend no time at all setting about making start to look like a proper boat. 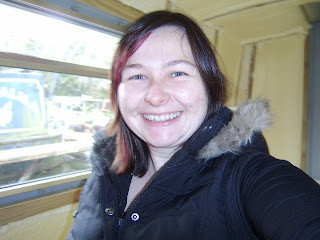 and sharon stood in the kitchen to be. 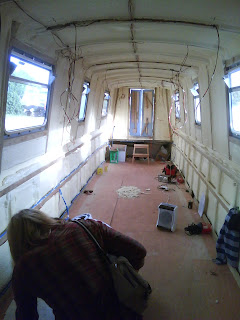 After only 2 days most of the wiring was in which was amazing, its hard to keep up with her and the blog with pics.
Posted by Narrowboat Bespin at 12:36 No comments: 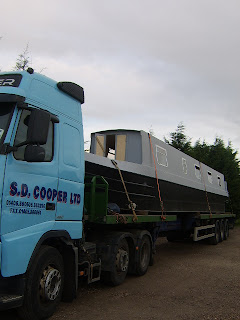 And went in the water 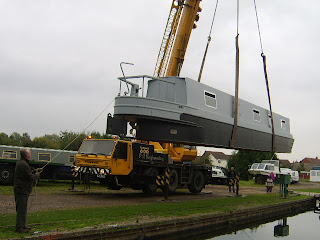 Was so exciting, though i had to be at work and sharon had to send me the pics on e mail
Posted by Narrowboat Bespin at 12:29 No comments:

Our boat as started to be built this week i think, though we have to wait an extra 2 weeks to get it, can not wait to get going now, all the bits are in place to build the thing.just got a victron inverter charger cheap off ebay that i will need to send off to victron to check out.
Posted by Narrowboat Bespin at 12:14 No comments:

bought me batterys for the boat, 6 2v traction ones, they weigh a ton i nearly could not lift them in the boat, lucky someone else brought them for us as the car was right down with just 3 in. just hope that they fit in the boat with no problems now when it comes. Hoping it will be the 1st of october need to conferm it this week then the real fun starts. now got my eye on a cheap victron inverter now. :0)
Posted by Narrowboat Bespin at 11:08 No comments:

this week as seen all the stuff we ordered in the post come so we now have our heating sorted. the basin for the bathroom. and a new tassimo for the kitchen though i dont think this does not on the serface appear to be an important part of the build it is honest. :0)

we also went to pick up a shower enclosure which just fit in the car which was more luck than judgement though when we were out someone came to look at our boat so we missed them emm.

my current reading is on electrical stuff and bonding your 240 to the hull.
Posted by Narrowboat Bespin at 23:47 No comments:

when we sold the house finally after 2 years we told everyone we were going to buy a new boat and fit it out. everyone wondered why we would want to do this when we have a perfectly nice boat already that we had done work on. well heres the thinking

First off we didnt really know you could buy one to do out when we bought this one and also we would not have known how to fit it out if we had, living on one for 2 years does teach you a massive amount about what needs to go in one. So this boat was a research boat for our proper one.

Also what we thought we wanted in a narrowboat is not now what we think we need, like corridors and a seperate bathroom so we would have to do a lot of work to this one to change it and that would cost be messy.

if we were going to spend all that money refitting this one then we might as well get a new one that is 15 year younger with a new engine and start from scratch and then it would be our boat from the start and we would know were everything is eg the wires !!!

So we went and placed a order for a lined shell which will hopefully be here in 6 weeks or so.
then the real fun begins.

in this waiting time we have been very busy spending money trying to get stuff cheap. so far we have got

god love ebay, we were thinking changing the name to that and seeing if we could get some ad money :)

also ordered lots of other bits trade so at the moment we are currently under budget i think.

been spending most of the time reading up on everything on the forums and asking silly questions about stuff.
we are really hoping to get this right as we dont plan to move off this boat for many year and definatly not to a house.
Posted by Narrowboat Bespin at 23:42 No comments:

well not much happened to us for ages, moved out of our house onto the boat last year and have been waiting for it to sell since then, well it as finally sold YA!!! so we are finally able to move on.

So this will be part 2 of the bespin story.

First off we are buying a new boat and selling this one that was never renamed so the new one will be the real bespin.

Secondly we are fitting it mostly out ourselfs from it being lined which is very exciting so im hoping if i remember that i actually have a blog to do one of them fitting a boat out blogs.
Posted by Narrowboat Bespin at 23:35 No comments:

Narrowboat Bespin
its just us 2 and pablo and bespin the cats.